As I laid on my chest with needles sticking into my shoulders, a lady said, “I’m going to hook these up to electricity, ok?” I tried to nod, but couldn’t with my face snug in the massage table frame, so instead I said, “Ok, yeah, sure,” which just goes to show how awful my never-ending headache has become. Not only did I let a woman I had just met who spoke in a thick Chinese accent I only 88% understood send electricity through needles she had stuck in my back, I paid her to do it.

Last Thursday I had acupuncture. It’s one of about three dozen things on my checklist called: “Things that might cure the headache, but probably won’t, yet I still have to spend thousands of dollars on just to make sure.” I am not a big believer in Western Eastern healing arts, however I do believe acupuncture is sometimes effective in relieving pain, even if we don’t know exactly why. There have been studies that have shown it’s better than a placebo, one of which I saw reported on the nightly news the week before, which reminded me that, oh yeah, I needed to find an acupuncturist and get some needles jabbed in my head already.

One of the most trying things about my headache is trying to locate legitimate, competent healthcare professionals in the fields I’m exploring. Exactly how do you find an acupuncturist who won’t bleed you with rusty nails? And how do you find a chiropractor that won’t break your neck? Most people ask their friends for recommendations, but none of my friends were of any help, so I’ve been using the Internet. I check out practitioner’s web pages, see if they have accreditations or if they belong to professional organizations, check for any other references and ask how long they’ve been practicing. Then I just jump in and hope they don’t kill me, or if they do, they do it quickly so I can stop being in pain all the time.

When I called the acupuncturist, all she asked for was my name, phone number and what time I wanted an appointment. I loved this. When I called the allergists right before her, they made me give them my birth date, social security number, insurance information, home and cell and work phone numbers, and emergency contact information. They got everything but my jeans size.

Alas, the acupuncturist was saving all these questions for the new patient form I had to fill out in the lobby upon arrival (except for the jeans size). This is the other trying thing about my headache: I have to fill out lots of forms. Over and over and over again. If hell exists, it consists of me, sitting in a medical office lobby, filling out a 500 page form which includes the same questions on every page. Did you paternal grandmother have diabetes? Well, did she? Did she?! We have to know or we won’t be able to treat you!! Now circle the area on the figure where you have pain. Do it! Do it now!!

I wasn’t sure what to expect at the acupuncturist, but she had a distinctly medical vibe going on. Her lobby was like any doctor’s lobby. The treatment room had sterile white sheets and standard office decorations. 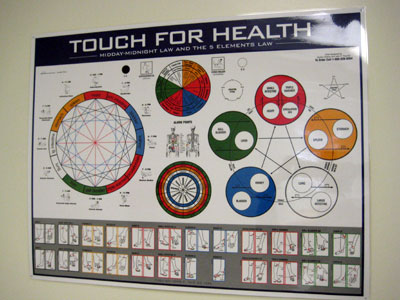 There were posters on the walls and medical supplies in the corner. 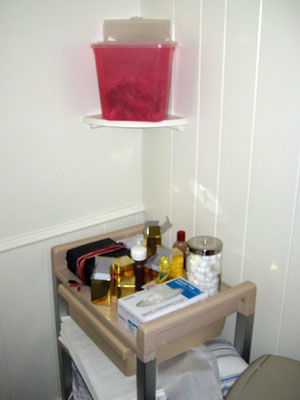 She even wore a white lab coat, which made me feel better even though I knew she was wearing it solely because it would make me feel better and not because she was actually a doctor.

I talked to her for a couple minutes about my problem as she went over my forms. Then I put on a medical gown and laid on my chest. She pressed on places on my shoulder and asked if this was where I ached. If I said yes, she then positioned the needle above the spot and – TAP – inserted the needle into my skin with a swift motion. Then she asked if I could feel the needle. Most of the time I could not, except for the moment when it was inserted.

After she inserted about 20 needles into my back, she broke out the electricity. I had visions of an Aeon Flux episode: 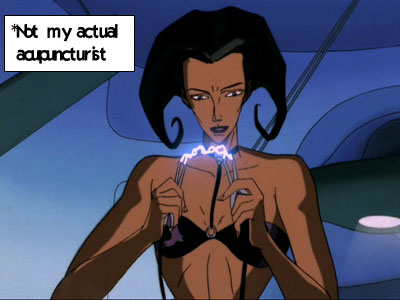 “Tell me when it starts to vibrate,” she said as she turned a knob (I assumed, as I could not see her).

“I don’t feel any – oh, ok, yeah!” I said as the needles started to vibrate pleasantly on my right side. Then she repeated the procedure on the left.

“Ok, I’ll be back in 15 minutes,” she said and then left the room. Leaving me alone. With needles in my back. Plugged into an electric socket. In the dark. With Muzak.

Which left me plenty of time to wonder how I’d gotten myself into this situation.

When she returned, I flipped over and she stuck needles in my face, around my temples and in part of my scalp. This time there was no electricity, but the needles around my temples hurt a little. When she came back 15 minutes later she asked, “Is headache gone?”

“Sorry, no.” I felt basically the same, though slightly buzzed or dizzy. I hate letting my healers down like this. I know it’s not my fault. They want me to get better and I want to get better for them, but it never happens. It’s been eight months. I doubt I’m ever going to get better.

So I scheduled one more appointment, just to give it another shot. But after that, I’ll probably leave the needles to my sewing kit.

Later: Pour some sugar on me
Earlier: I love a parade (not) – Riding the Cultural Trail
Home: Main blog index