Yesterday someone on Twitter said that “lime jello + orange jello = awesome” and this statement instantly lighted up the part of my brain storing the memory of Jell-O 1-2-3. 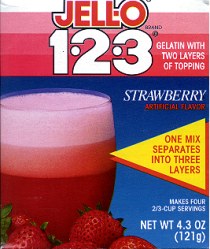 Jell-O 1-2-3 was a triple-layered product that had normal Jell-O on the bottom, a foamy layer on the top, and the most scrumptious, creamy, mixture of the other two layers sandwiched in the middle. The product was discontinued in 1996, which means Jell-O 1-2-3 has not been available since before I could drive (legally).

I googled around and quickly found a hack recipe for Jell-O 1-2-3 at the Kraft Foods site. (They must get asked about it a lot.) It seemed simple enough, so I tried making it last night. Here is the recipe followed by my experience. 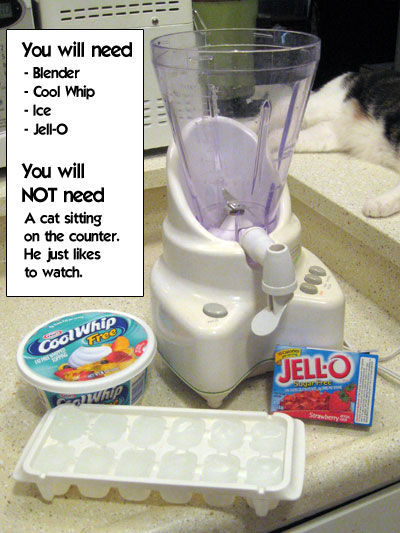 Before anyone asks, yes, I know the smoothie spout on my blender is upside down. Don’t worry, gravity is still working as normal in my house (as Java Bean has been carefully monitoring). The blender is old and I have to turn the spout that way to seal it completely. A cap came with the blender as an alternative to the smoothie spout, but was lost in a move when a family member found it and said, “Huh, a bottle cap. Don’t need this!” and threw it in the trash. And before anyone else asks, traditionally sized bottle caps do not fit the spout. I’ve tried. Thus, I use an upside down spout, until I buy a new blender, probably this week, because this one leaked red Jell-O mix out the bottom and looked like it was BLEEDING all over the counter.

Uh, right, so where was I? I mixed boiling water and Jell-O mix in the blender, which was a lot more fun than just stirring it with a spoon like I normally do. 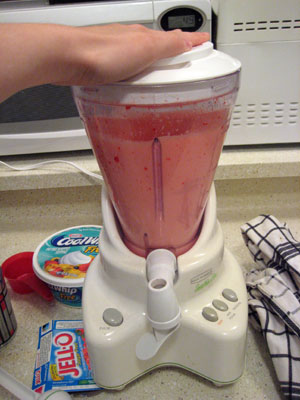 At this point, it wasn’t very frothy yet. 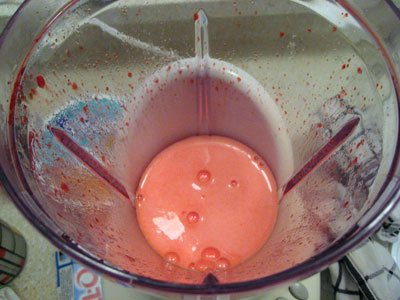 I mixed in the cold water and ice, and then I added the magic ingredient: Cool Whip. 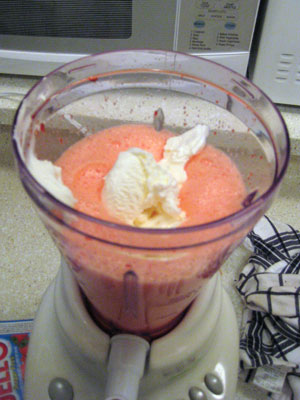 This was the hardest part of the recipe for me because I love few things more than eating whipped cream straight out of the tub. I wish they sold whipped cream in smaller containers, because I usually end up eating a whole box in a day. It’s one of those foods I don’t let myself buy often because I can’t control myself around it.

I then poured the mixture into glasses and let it set, resulting in this: 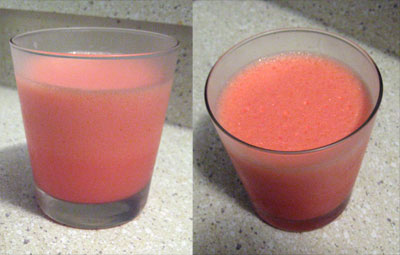 Not so much Jell-O 1-2-3 and Jell-O 1…3. I got a gradient of textures instead of three distinct layers. I’m not sure if I added too much whipped cream, if I blended for too long or too little, or if the temperature of my water was off. This blogger’s attempt came out better than mine as did this lady’s.

However, it was still tasty, pretty damn low-calorie, and brought back happy memories. I’ll probably try it again as soon as I buy a blender that doesn’t leave my counter looking like an ER.