This is Java Bean.*

Java Bean came to live with me three weeks ago after a friend of mine adopted his whisker-biting sister. I can’t turn down free donuts and I can’t turn down free kittens either. Java Bean was born in the wild (or as wild as Indiana gets) and survived a respiratory infection that killed three of the nine kittens in his litter. When I stopped by the vet, four of his brothers and sisters had been adopted, leaving me in the position of deciding which of the last two kittens would be picked last for dodge ball. After Java’s brother bounced around the room and tried opening my purse, I decided the more low-key cat was the one for me.

I took him home four days later and he spent the weekend inspecting the quality of my box springs. I slowly lured him out on the second evening and by the end of the night he was on top of the bed instead of underneath it, bouncing on my chest demanding we play with that crazy string toy. 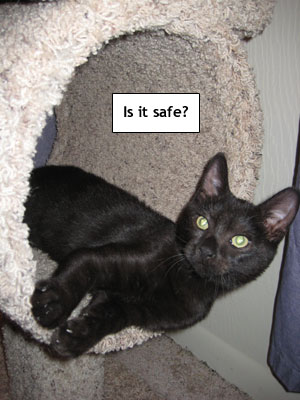 I got Java Bean partially because I think Krupke, my first cat, gets bored and lonely while I’m away all day. I wanted him to have a playmate. Office Krupke reacted as anyone would whose life has been changed without his permission. He was pissed and he hissed. I kept them in different rooms the first several days, so they could talk to each other under the door. Then we moved onto supervised visits, where there was much growling and batting and chasing. Eventually Krupke adopted an air of begrudging tolerance towards this energetic young whippersnapper who was sleeping in his cat bed and pooping in his litterbox. Java in turn sometimes follows Krupke around like a cooler older brother. I hope that by the time winter comes, they’re snuggling up together to keep warm. 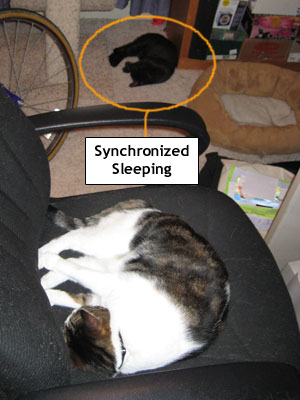 Having a kitten reminds me of all the things Krupke used to do that I’d forgotten about – like knocking stuff over. Java has reorganized by toothbrush cup, my facial cleanser, and my deodorant, preferring them in the horizontal position rather than the vertical. Java traipses across the computer keyboard with no qualms, something Krupke learned not to do years ago. I suspect Java is a ball of energy wrapped in a cat suit, much like Krupke used to be before he discovered the value of napping all day. 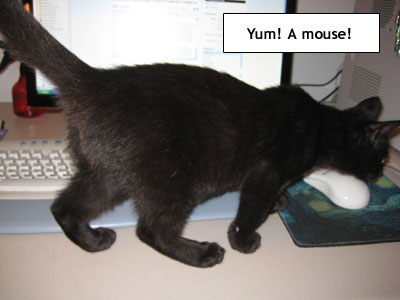 They have their differences too. I left a bag of kitten chow on the floor by the feeding bowls and when I returned that evening there was a kitten-sized hole gnawed through the side. Krupke never did anything like that. Java bean is definitely a biter, loving to chew on laptops, Ethernet cable, and even coffee carts (with much less success). Krupke has never been so destructive. I often refer to Krupke as “Officer Krupke, the chair stealer.” If I get up from my office chair for 15 seconds to return a glass to the kitchen, I will return to find a ball of fur curled in the seat, thoughtfully keeping it warm for me. Java Bean is another kind of thief, “Java Bean the sock stealer.” His true nature was revealed when I walked into my bedroom last week and saw a white athletic sock draped across the door’s threshold even though I’d taken my shoes and socks off in the living room. One lone sock, separated from its twin. He must have been a dryer in a former life.

Java Bean has also appointed himself to be Chief Gravity Tester for our household. He will frequently knock pens off of my desk or shove entire stacks of papers off of the coffee cart to alert me that, yes, gravity is still working. In an effort to lighten my workload, he tested gravity on a dirty plate yesterday, leaving me one less dish to wash. How considerate of him! 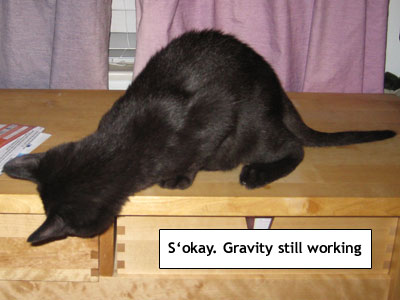 Now when I come home, two kitties greet me at the door. I feel so lucky to have two lovely kitties, but one thought never escapes me, “Holy crap, now they outnumber me.” But judging from the picture below, they still don’t outsmart me. 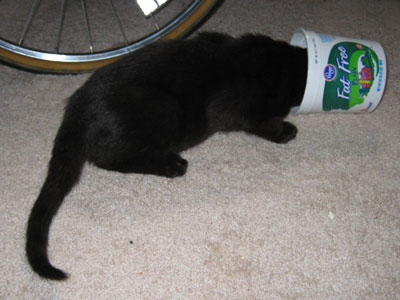 *Yeah, I know. It’s only my second post in the post-weight-loss-only blogging era and I’ve already gone straight for the cats. If I’m going to be a crazy cat lady when I grow up, I need to start now.