Why is my mother distributing condoms in front of my workplace? 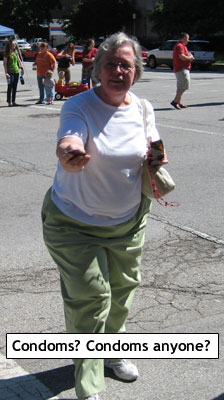 Well, we were on our way to the tea room. No, wait, we were going to stop at the quilt exhibit first. Okay, let me start at the beginning.

I’d been in the Indianapolis State Museum many times, but only to pee before running long distances around downtown. They hosted the mini-marathon training series I ran in, but they also host exhibits about history and arts and crafts. How versatile of them! My mother and I wanted to see the Radical Lace and Subversive Knitting and Quilting Blocks and Binding Blocks exhibits. We don’t quilt or knit, but we like to pretend we could. The museum is also home to the L.S. Ayres Tea Room, a recreation of a restaurant ladies lunched at in the L.S. Ayres department store before it was torn down. I live on the north side. My mother lives on the south side. The museum is downtown. So is my workplace.

“I’ll park in my company parking garage. You can come swooping down the street and I’ll dive in the back seat. Then we’ll head over to the museum, okay?” I proposed to her over the phone.

Everything was going fine until I ran into a roadblock, complete with police car and flashing light, one block away from the garage. Ooooookay. There were tents set up in the park across the street, so there was obviously some sort of festival going on. When I saw a man in a black kilt walk by, I wondered if it could be the Irish Fest, but I distinctly remembered running their 5K in September, not June. I detoured to the west and started circling in on my building, taking 10 minutes to travel about three tenths of a mile.

I was now one block to the south of the building when – curses! Foiled again! Another road block was completely blocking me off from the building. In fact, access to the parking garage was completely blocked. Security hadn’t been this tight downtown when Barack Obama and Hillary Clinton were campaigning. What could possibly be going on?

I drove my car right up to the road block, flashed my ID badge and begged the cop to please, please, please let me park my car in the garage. But no, I was obviously a horrible threat to the security of whatever was going on and would not be allowed to drive up the street to park in the garage that I pay something-odd dollars a month to use. That would be WRONG.

I turned around and found a parking spot on the street a couple blocks away. I wasn’t worried about the parking, I was concerned because my mother does not have a cell phone. She’s off the grid, y’all. If an unassuming young lass like myself with a fancy ID badge could not get to our rendezvous point, there was no way a nice, silver-haired lady in a Saturn was going to get past the cops. I started walking to the parking garage, hoping she’d parked elsewhere and had walked to the corner too. About 30 people on motorcycles followed me. What on earth was going on?! 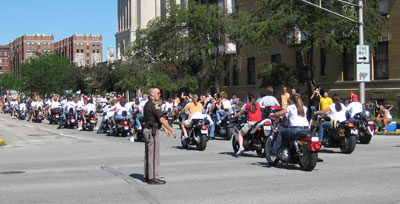 Then I saw the flag corps twirling rainbow colored flags and I figured it out. 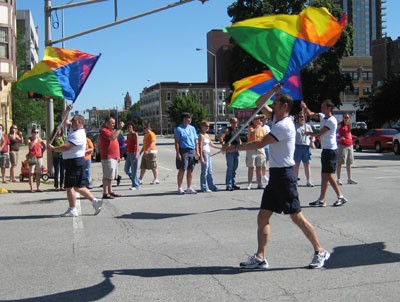 It was the pride parade! Completely screwing up my rendezvous plans! But at least they had lots of candy.

I got to the parking garage and of course my mother wasn’t there. “Okay, if I were my mother and I ran into the gay pride parade on the way to rendezvous with my daughter at the tea room, what would I do? What would I do?!” I walked behind the building. She wasn’t there. I walked a block south. She wasn’t there. I thought she might be circling the block south of the road block and considered waiting at the corner. However, that location is also home of the homeless mission and several shady characters constantly lingering on the corner, so I headed towards the more brightly dressed social outcasts instead. Which is when I saw my mother! She was strolling towards the parking garage after parking at the Marsh. I wanted to run right up to her, but I was tragically delayed 45 seconds by a “Do Not Walk” sign. Finally, I crossed the intersection, ran down the street and finally met up with my mother only 30 minutes after I was supposed to.

“It’s the pride parade!” I told her. “They didn’t mention this in the company newsletter.”

So, we attended the pride parade. And it was fun and gay and all that. I don’t think I’ve ever attended a parade before, pride or not. I was in a small parade in Crawfordsville, Indiana when I was a girl scout there in 2nd grade, but all that amounted to was driving past the Dairy Queen in the back of a pick up truck. This parade had floats and beads and candy and scantily dressed men who I think wanted to sell me real estate and whom I hope applied lots of sunscreen. (I am available to help with that.) 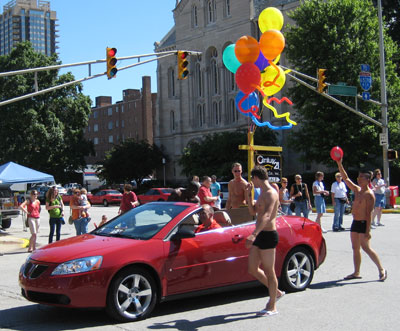 If life throws you a parade, you’ve just got to go with it. Grab some beads and don’t cry about the roadblocks.

If you attend a pride parade, I highly recommend that you bring a toddler with you. A niece or cousin will do, but you might just rent a child in a pinch. While I had to dive into the street five times before I finally caught a string of beads, parade goers would walk straight up to the 6-year-old standing beside me and hand him Tootsie Rolls and stickers and shiny jewelry. He did not have to work for it at all, whereas I had to pick up Dubble Bubble off of the street after the parade had passed by.

Near the end of the parade my mother spotted someone marching with pretty red beads which she decided she MUST have. She headed off into the crowd to score her bounty and the parade denizen handed her not only shiny, red beads but shiny, red condoms too, which spilled onto the street. My mother has a compulsive need to tidy things up, so she picked up over a half-dozen brightly colored condoms as their distributor continued walking down the street. Then she turned around, looked directly at me and started offering condoms to me on the street right in front of my workplace. Because she believes in safe sex.

And then we went to the tea room, wearing beads, with condoms in my pocket. 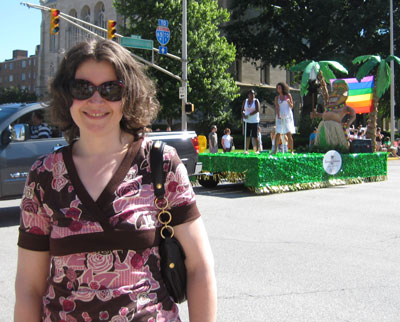 (See, this is why I carry my camera everywhere! You never know when you’ll run into a pride parade!)

Later: My acceptance speech
Earlier: The headache that never went away: Part 4 – Watching my life unravel and knitting it back together
Home: Main blog index