Yesterday was one of the top ten best days of my life, which is an odd thing to say about any day I wake up at 5:30am. 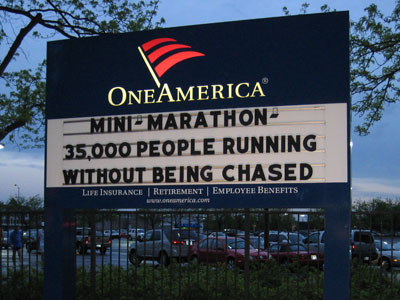 My mom and I drove downtown and parked in my office’s parking garage, which is conveniently located 4-5 blocks away from the starting line. Thus we avoided any parking nightmares and I felt slightly better about the garage fee they take out of my pay check every month. I felt chilly in my long-sleeved shirt and sweater as we walked towards the starting corral. The sun was still rising, but from what I could see the weather appeared gloomy, though thankfully it wasn’t raining. Thunderstorms had whipped through town the night before and there were still some puddles in the road.

As we got closer and closer to the starting corrals we encountered more and more people. It felt like I was in the movie Close Encounters of the Third Kind where everyone is inexplicably drawn to the mountain at the end of the film. I was one of thousands of people converging on a couple blocks of downtown Indianapolis for a shared, unspoken reason. 35,000 people run the half-marathon, so to prevent congestion they divide us into starting corrals from A-Z based on our estimated finishing time. I was in S. As my mom and I sat on the blockades, we read people’s bibs and occasionally I would whisper to her, “Look! That person is a B!” as though I’d just seen a celebrity. I only saw one A and I felt like I should kiss his running shoes in tribute to his superior athletic skill.

About 15 minutes before the gun time, I got into my corral. This is when I started to feel a little self-conscious about the sign I’d taped to my back. 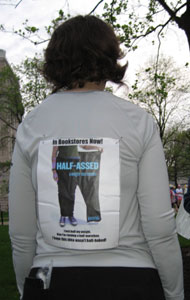 I figured there were 35,000 people in this race, and most of them would be passing me, so I might as well use my back to promote my book. I felt a bit silly about it, but I figured I wouldn’t have to make eye-contact with anyone who read it, saving me some embarrassment. I checked my phone and saw I’d missed a call from Laura, another blogger running the race, and called her back, but we weren’t able to find each other before the race started. Sorry, Laura! 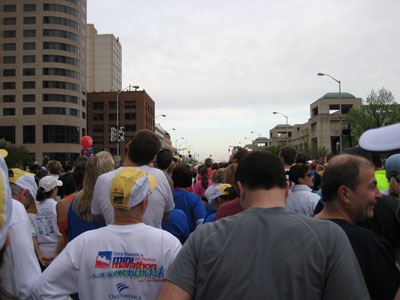 Can’t you smell the excitement? As I said, I was in the S corral, meaning thousands of people in the A-R corrals were ahead of me. So, we waited.

Someone threw a beach ball into the crowd which we bounced around. Slowly we started walking in fits and stops to the starting line two blocks ahead of us. As we got within 100 yards of the starting line, people started walking faster, then we were jogging, and then 18 minutes and 15 seconds later I was crossing the starting line thinking, “Oh, hey, I’m running a half-marathon. How weird.” Then I did some mental math and tried not to be discouraged by the fact that the elite runners were already past mile 3 by now.

The race course was very similar to the training series course, except for the pit stops where the asphalt road could barely be seen beneath the trampled paper cups. At first I tried tossing my cup into the trash cans, but they were overflowing by the time us slower runners passed by, so I settled for aiming for the gutter instead. I had brought my headphones and MP3 player along, but was surprised to find I didn’t need them because so much was happening. There were good cover bands and bad cover bands and bagpipes and cloggers and square dancers all along the route. I wouldn’t even be able to plot out the race course on a map because I wasn’t paying attention to the street signs. I just followed everybody else. There were time clocks at each mile marker, so I kept checking my pace bracelet as we ran, mentally trying to add 18 minutes to the time. Mental math is hard when you’re running a mini-marathon.

Near mile 6, I started to think about walking. I kept running anyway. Then we came upon the Indianapolis Motor Speedway. As part of the race, the runners do a lap around the Speedway, though I was only going about 2% as fast as the racecars. We ran down a steep ramp to enter the stadium. Awesome! So fast and so easy. Then we had to run up a steep ramp to get on the track. Not awesome! So slow and so hard.

It was at this point that I realized the weather was freaking gorgeous. The sun was shining bright, a cool breeze came across the infield, and I was actually a bit hot. I couldn’t believe I’d thought about wearing my fleece vest this morning. Suddenly all those people in shorts and tank tops that I’d laughed at in the morning cold seemed a lot smarter than me. I rolled up my long-sleeved shirt and kept running around the track.

And kept running around the track.

And kept running around the track some more.

The Indianapolis Motor Speedway is evidently two and a half miles long, as I now know very well. After we exited the speedway, we passed a family sitting on lawn chairs in their front lawn drinking beer and watching us run by. After I passed through a Gatorade station, my feet started sticking to the pavement. Oh no, how many seconds was that taking off of my time?

At mile 10, I decided I needed the cheesy techno. I put on my headphones and it was only a dance remix of Bryan Adams singing “Run to You” that got me through the next mile. I started wishing the pit stops would come closer and closer together so I’d have a good excuse to slow down and walk. Someone ran past wearing a shirt that said “Are we there yet?” Good question.

Somewhere before the 12 mile marker I slowed down to walk for a minute. Then I started running again. As we got within a mile of the finish line the signs started telling us how much farther we had to go. 1 mile left. 3/4 of a mile left. At 1/2 mile left I stopped to walk. My lower abs were aching and my toes were starting to hurt.

As we approached the 1/4 mile left sign, I could finally see the finish line. I started running again. A woman on the sidelines yelled, “Go, Jennette!” While I know she just read my name off my bib and had no idea who I was, it was very encouraging. Some people next to me actually started to sprint to the finish line. Jerks. I would have tripped them if I wasn’t so damn exhausted. As I kept running and running, the finish line came closer and closer. It was very unexpected. For the last leg of the race in my training series runs we had to turn a corner and then turn a corner and then turn another corner and BAM! there was the finish line. Now I could actually see the end heading straight towards me.

And then I crossed the finish line. I couldn’t believe it was over. No, really, I didn’t quite believe that it was okay to stop running. For the last three miles I felt like I’d be running forever, that the rest of my life would be spent drudging along, trying to finish an endless race. I imagined that decades from now my relatives would be driving past 10th street, see me and shake their heads sadly as I plodded along trying to finish that damn mini-marathon. “Keep going, keep going, keep going,” I had told myself and now I got to say, “Okay, stop.” It made the race suddenly seem much shorter. A 13.1 mile race is much shorter than an endless race.

I threw my hands up victoriously for the photographer, though I was so tired my palms probably didn’t reach above my head. My official time was 2 hours, 33 minutes, 26 seconds. Then I got lots of free stuff that only cost me $50.00 in registration fees. At the recovery area I grabbed a banana, apple, potato chips and a rather dry, chocolate chip cookie. But no bagels! What was this? All the training series runs had bagels afterwards, but suddenly there were no cinnamon crunch or French toast bagels in sight. Where were you when I needed you, Panera?

People sometimes joke about hobbling after runs, but I literally did hobble to the family reunion area to get a big hug from my mother.

“Thanks. Can I lean on you?” I replied. And then I did. I leaned on her for a whole minute before I felt strong enough to stand up again. Someone must have rearranged the layout of the city in that time because suddenly the parking garage was a lot farther away. Even today, my quads are sore, my toes are sore, my shoulders are sore, and if I breathe in really deeply my lungs are sore.

Before I left, I was standing in line to get my picture taken with my shiny finisher’s medal and I heard a girl in line behind me say, “That’s so awesome.” While she might have been referring to her chocolate chip cookie, I think she was referring to the sign on my back with my book cover which said, “I lost half my weight, now I’m running a half-marathon. I hope this idea isn’t half-baked!” Her comment made me smile a little bit, because while I’m mostly a humble person, it is pretty awesome isn’t it? I really did lose half my weight. And I really did just run a half-marathon. When my mom and I returned to the parking garage, she said there were a lot of things she’d thought I do in life, but never this. “I never thought I’d have an athlete in the family.” And we didn’t even have to adopt an NBA superstar to do it. It’s me.

Then we stopped at a bakery and I stood in line, sweaty and gross in my full running gear, to buy a huge cinnamon roll. Because seriously, no bagels?

Later: TiVo alert a.k.a. why I’m flying to New York this weekend
Earlier: Twas the night before the mini
Home: Main blog index