As we walked down the New York sidewalk Sunday afternoon, I moaned to my aunt Lori about how stressful it had been finding my way from Kennedy airport to my hotel in midtown Manhattan the night before. It was an endless saga involving hidden elevators, express buses that took their damn time and AirTrains that did not fly through the air but disappointingly looped around the airport terminals endlessly. Eventually I decided the price of a taxi was worth eliminating the chance of getting lost in New Jersey after midnight with only a box of soy protein bars and lip gloss for sustenance.

“So, you appeared on national television this morning without any anxiety, but it was traveling from the airport to the hotel that stressed you out?” my aunt asked incredulously.

Bizarrely enough, it’s true. I didn’t feel stressed at all during my 3 minute and 43 second stint on The Today Show for the same reason I didn’t feel stressed about running a half-marathon. I’d trained hard, I came prepared, and I knew I could do it. Raaarrr! Even before the book came out, I took every opportunity to do interviews so I could practice talking to people about my experiences. I’ve done so many now that you’d have to ask me a truly bizarre question to throw me.

The airports, though, still freak me out.

My hotel was about a block away from NBC studies in Rockefeller Center and I got there at 8:00pm. I was glad the taxi dropped me off because the hotel entrance is so discreet that I would never have seen it next to the Johnny Utah’s, which according to Lori has a mechanical bull. (Don’t ask her how she knows that.) The room was small, but very nice. They even folded the toilet paper in a triangle. Fancy! 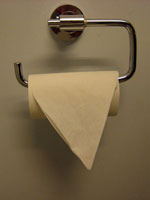 My aunt met me and spent the night so she could be my official photographer the next day. I had to wake up at 6:00am to shower, blow dry my hair and wear my normal makeup as instructed. Of course, I never wear makeup, so I just put on some foundation and concealer and tried not to burn my scalp with the hair dryer. An official NBC page met me in the lobby at 7:30 to walk me to the show. And yes, with his red-hair and fresh-face he did look a lot like Kenneth, the NBC page from 30 Rock 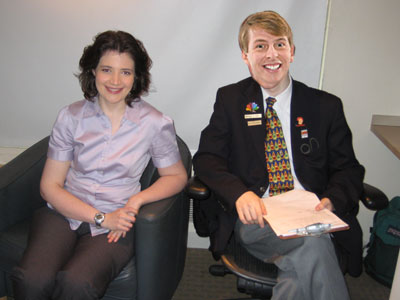 We walked past the windows of The Today Show studio and then inside and downstairs to the makeup and hair room where Joel and Nameless-Hair-Guy made me pretty. This took at least 15 minutes because cute does not come easy. 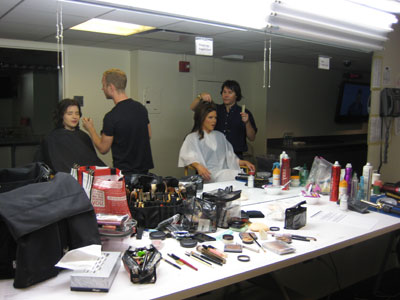 As I was escorted across the hall to the green room, we passed a big LCD monitor that showed a live feed of host Jenna Wolf getting spritzed and primped two minutes before show time. Then I sat on a black couch underneath framed photos of all the hosts and examined their spread. 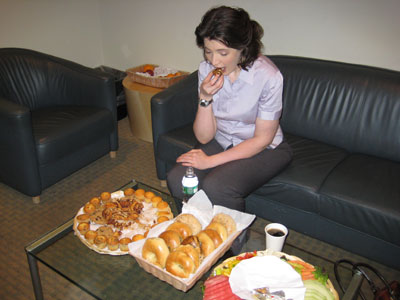 For some reason the basket of peaches and apples was exiled far away from the scrumptious mini-muffins and bagels. (See them over my shoulder?) In all fairness, there was also a plate of melon slices on the main table, so they weren’t forcing baked goods down my throat. I did that myself. (Vacation calories don’t count!) According to the listings, Susan Sarandon was scheduled to appear, but I don’t think she did. Scared of being overshadowed, eh, Susan?

Next the producer came in and went over the segment with me. We’d done a pre-interview on the phone a week before where I chatted for 20 minutes about my experiences. I’d also scanned some new photos for the graphics department to show on the screen while I talked. She went over the script and the questions they were going to ask me, which was another reason I wasn’t stressed. After she left I kept going through my answers in my head. I knew I wanted to get four points across:

I figured if I accomplished those four things without falling off my stool, the interview would be a success.

Soon they were walking me over to the set where we snuck behind a big wooden wall and then quietly weaved through camera equipment. I sat down on one of two stools set on either side of a huge TV monitor that were directly opposite of the couch Lester and Jenna were hosting the show from. They were broadcasting live and if I dared to clear my throat or let out a big fart it would have been heard in millions of households across America. There was a live feed of a reporter covering tornado damage in Oklahoma right behind me and it felt like he was standing over my shoulder even though he was hundreds of miles away. 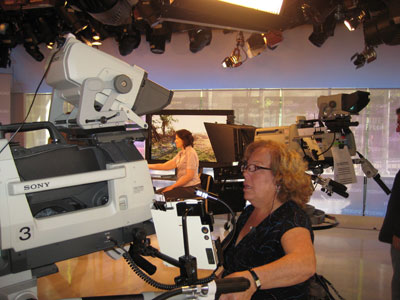 To the left and ahead of me, a lady stood at a podium and did a short report about…a pelican? I can’t really remember. I just remember watching her and thinking that she was overacting and laying it on thick. Yet, I bet when you watched it on TV it came across as really energetic and animated. TV is weird like that.

Then they went to commercial and Lester walked over and introduced himself with a very firm, politician’s handshake. He checked to make sure he was saying my name right and I told him I was going to try to say hi to my mom. A stage hand tried to steal my fat pants hanging off the back of my stool. No, not without my fat pants! He’d mistaken them for a sweater and put them back on the stool. I can’t remember what else I talked to Lester about if anything because I was distracted by the cameras swinging 180 degrees around to focus on us. The producer had told me to just look at Lester. Otherwise I might get distracted by the teleprompter and the monitors and got a deer-in-the-headlights look when the interview started. So I just focused on Lester’s face as they counted down from 10 and then OH MY GOD we were on national television.

Lester Holt was talking about one woman’s struggle with weight and, holy crap, that one woman was me. I just kept looking at his pretty face, curious about what was being displayed on the monitor but too fearful to look anywhere else. He asked me most of the questions that had been in the script, but in a slightly different order. I dodged and weaved with it, dancing along with him leading. Then suddenly he asked me what I thought of weight loss surgery and, hey now, no one had told me we were going there! I rolled with it though and even worked in a happy mother’s day at the end. He seemed genuinely amused that I couldn’t say “half-assed” on TV and then the interview was over. It was good-bye Lester and I was walking off the set. 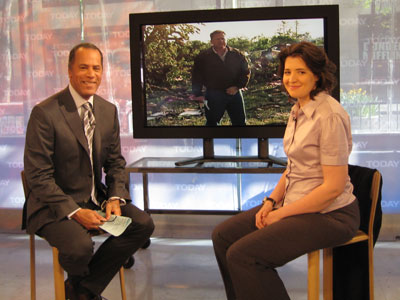 It all went amazingly well. For the past month I have been slightly worried about whether people who meet me at book events will think I’m still fat. I think I look fabulous, but I’m not the skinniest chick in the room either. I don’t really care about what other people think of my body under normal circumstances, but I also don’t want to be known as the fat girl who’s promoting a weight-loss memoir. When I watched The Today Show two weeks ago and saw that my full body would be visible on a stool, I did a little freak out dance. Where was the carefully cropped head shot? I’ve always thought I look my fattest sitting down. When I was morbidly obese, I once saw my reflection in the window as I was sitting in my office chair and freaked out like a groundhog who’d just seen his morbidly obese shadow. Thankfully, when I reviewed the tape of my appearance, I looked great in my lavender shirt and the gray pants from Goodwill that my mom hemmed the afternoon before. I sat up straight, I got my four points across (or three and a half since I couldn’t say “half-assed”), and I didn’t fall off the stool. Mission accomplished.

I also have a newfound respect for TV people. It’s amazing all the time and preparation that went into that short little segment. I’m awed by the amount of energy and pizzazz you need to host a show and the ability required to dodge and weave and go with the flow. My segment got moved from the 36 minute mark to the 42 minute mark and I’m sure they were rearranging other things. Right after we were done, I left the building and walked by Lester and Jenna doing a shot outside in the crowd. They were always running around and changing things up, but looking totally calm and collected as they were doing it, like it had all been planned for weeks.

Then I went out to brunch at Sarabeth’s with family and friends and ordered the Fat and Fluffy French Toast. That’s right. I promoted my weight loss book and then I ate a dish with the word “fat” in the title. And it was delicious. Mmmmm.

For the rest of the day, whenever I looked in a mirror I was shocked at my reflection. “I have a face!” I told my aunt Lori. I have never looked cuter in tourist photos than I do in my New York pics. When I got home and read my e-mail someone said they liked how I’d answered a certain question and I thought, “Did we talk about that?” I honestly couldn’t remember. Yet, all together it was one of the most memorable experiences of my life.

Later: The headache that never went away: Part 1 – My buddy and me
Earlier: Today’s entry about yesterday’s Today
Home: Main blog index