The only thing you really need to know about the 10K I ran on Saturday morning is that, yes, there were cinnamon crunch bagels. And yes, they were even tastier than y’all led me to believe. 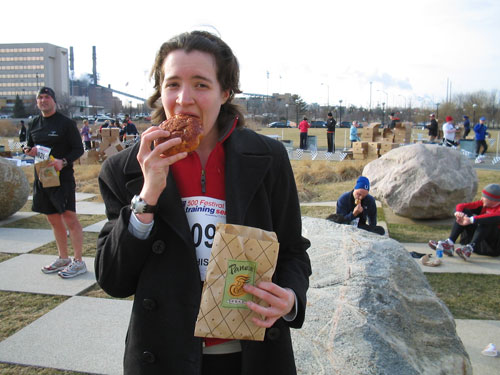 Take note of the man over my right shoulder who is surely thinking, “Mmmm, I wish I’d gotten one of those bagels.” I don’t know why they call it a bagel since it was really a cinnamon roll with a crunchy topping. Coming in at 410 calories, I still burned off more energy running 6.2 miles than I consumed eating it. That, my friends, is truly sublime. (We’ll just ignore the part about 75g of carbohydrates. 75 grams!)

My mom stayed over the night before the race and got up at 6:30am to cheer me on and be my official race photographer. If that wasn’t enough, she also bought me flowers which are currently on my counter being guarded by the prince from the Katamari Damacy

video game. (I made him promise not to roll them up in a big ball.) 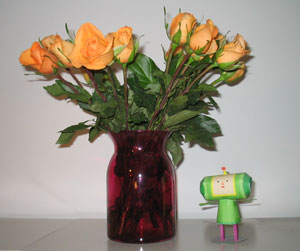 It was interesting attending the race with my mom because she is not in the runner’s cult, whereas I am a newbie still being indoctrinated. When I see people in space-age running gear warming up on the lawn, I get a little bit excited and start coveting the cuter gear. She, on the other hand, looks at the people walking around in shorts in 30 degree temperatures and raises her eyebrows. Actually, I raise my eyebrows at those people too, but going to the race with an “outsider” did make me aware of how much I’ve changed in the past year by becoming more serious about running.

The 10K differed in several ways from the 5K in the training series three weeks ago, and not just because it was twice as long. There were 1400 people this time, about 235 more than last time. And they were all in line for the women’s bathroom – the only women’s bathroom since the other one was closed. I usually take care of my business before I leave the apartment, but about 15 minutes before the race I had to go and decided I needed to go now and not on the side of the road at the 3 mile marker. I was worried I might miss the start of the race, but thankfully the organizers realized the problem and pushed the start time back about 5 minutes. Wow, competence in event planning! Amazing!

Last time I didn’t know where the start line was, so I ended up too far in front of the pack and got passed a lot at the beginning. This time I overcompensated and started too far back, forcing me to weave and dodge around a lot of walkers. I ran into several roadblocks of people during the first two miles of the race since the lane was rather narrow and there were so many people running. I had to slow down to maneuver around groups or speed up to dodge through a gap at several points. I never had that problem during the 5Ks I ran, but it’s probably good practice for the mini-marathon which will be packed. There was a loop in the course this time that let me see the elite athletes running past at the two mile marker right as I was jogging past the one mile marker. They were literally running twice as fast as I was and they made it look so easy. They were elegant, long-legged gazelles galloping past as the rest of us plodded along as best we could.

After about 4 miles, I saw a pack of runners running down the cross-street ahead and was relieved to know I was about to turn back towards the finish line. Only not. The race pack continued on another block before turning around. I don’t know who those rogue pack of runners were, but their evil mind games must be stopped! I also wasn’t too fond of the people I encountered around the 5 mile marker, people who finished the race and then jogged backwards on the route for some reason. That’s just showing off.

I managed to run the whole 6.2 miles, only stopping to walk at two points to down some Gatorade. I never stopped at the Gatorade stations during the 5Ks, but man oh man did it help ingesting some carbs during the race. I didn’t feel as “run down” at the end of the 10K as I did at the end of the 5K. This could partly be because I was running at a slower pace, but I think the Gatorade had a lot to do with it. I finished in exactly 1 hour and 7 minutes, setting a pace of 10:47 per mile. In comparison, I set a pace of 10:05 per mile at the 5K. My split time was 33:40, meaning I finished slightly faster than I started. That surprised me because I was worried I was running too fast at the start of the race. I kept telling myself “Slow down!” though I kept going faster than I thought I should be. I also crossed the halfway point after the fastest guy finished at 32:04. However, my mom said that several of the first people across the finish line barfed over the side of the aluminum guard rail. So, there are advantages to going slower.

After the race I got to google the phrase runner’s trots, which despite the word “trot” has nothing to do with horses.

Thankfully, I have 6 weeks to prepare for the next race in the training series, a 15K, which is 9.3 miles for us Americans. It’s about equal to the distance from the starting point of the race to my apartment. If I really wanted to reduce my carbon footprint, I could just have someone drop me off at the starting line and run home. Or I could lobby the racing committee to change the race route to end at my front door, assuming I baked everyone bagels.