Why is this man holding a sign with my name on it?

Continue reading to find out.

I don’t fly much, but when I do I love to look out the window to see the world below me framed like a picture in the rectangular window of the airplane. The city looks like a miniature train set. Some people say it’s like the world has shrunk so people are now the size of ants, but the view makes me feel like I have grown to the size of a giant. If the walls of the pressurized cylinder of air I am traveling weren’t in the way, I know I could step out my foot and squash power plants and stadiums like Godzilla. I’m so much smaller now than I was three years and 200 pounds ago, so it’s ironic that was also the reason I was staring out the window on a flight to Kansas City feeling larger than ever before.

I’ve gotten some odd e-mails because of my blog, but one of the most unusual ones came last month when I was invited to attend the all expenses paid Hallmark Blogger Conference on Thursday, October 25th. Hallmark recently launched a series of encouragement cards called Journeys (weight-loss being one topic covered) and they wanted to hear bloggers’ feedback and perspective. I had a lot of reasons for starting this blog, but finagling a free trip to Missouri out of the Hallmark corporation was never one of them. After getting over how odd this invitation was, internally debating ethics and morals and “selling out,” plus some extensive Googling of all parties involved, I decided, “What the hell! Why shouldn’t I go to Kansas City? When else am I going to get to use the phrase ‘all expenses paid’ without attending a taping of The Price is Right?” I’ve decided to say yes more often in my life, so I packed my bags, got my mom to drive me to the airport and flew across Illinois and Kansas to see what Hallmark had planned for me.

Full disclosure: Hallmark paid for my airfare, a night at the Hyatt in Crown Center, gave me a $25 gift certificate for dinner that night, and arranged for transportation to and from the airport as well as meals the day of the conference. And they had some damn good pumpkin bread. Mmm!

When I arrived at the Kansas City airport there was a man outside of the gate holding a sign with my name on it, which honestly made the whole trip worthwhile. (Yes, if I’m a sell out I sell out rather cheap.) Sadly, my digital camera gave its final death rattle the morning of my trip, so I had to buy an instant camera that used actual film to take pictures. I didn’t know they still made those. I made my poor driver stand there in the hallway for 30 seconds as I tried to take a picture before realizing I needed to turn on the flash. Then I made him stand for another 30 seconds as I figured out I needed to advance the film. Then I took the damn picture already.

It took 15 minutes to drive from the airport to the Crown Center, an area of shops, office buildings, hotels and even an ice skating rink that was a project of urban renewal by the Hallmark corporation in the early 1970’s. It is also home to the Hallmark headquarters. When I told my mom I was staying at the Hyatt, she said, “Oh, isn’t that where all those people died at a tea dance?” Uh, yeah, thanks for that information, Mom. There were no tea dances being held that night, so I was safe. I had some delicious sushi for dinner and finally, after years of inferior hand-eye coordination skills, managed to properly use chopsticks! 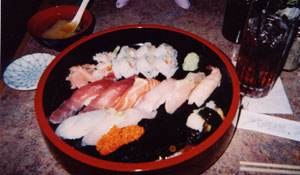 While I thoroughly enjoyed popping amber fish eggs like bubble wrap in my mouth, I had absolutely no idea how to determine the calorie count of my meal. So, for the first time since I started tracking carbs and fats a month ago, I decided I wouldn’t even attempt to figure it out. I think this is one of the biggest flaws in calorie counting: it’s nearly impossible to get an accurate count all the time. I also used to wonder what kind of idiot would pay $2.76 for a bottle of water. Now I know – a dehydrated, desperate idiot who didn’t get any meal service because of turbulence on her flight and could not bring her own water for fear security would confiscate it as deadly ammunition for water balloons. Travel eating is hard, and all the walking around concourses does not make up for the extra calories.

I had no idea who else was attending this conference, but when we all met in the lobby at 8:00 a.m. the next day I recognized Stephanie from Back in Skinny Jeans walking towards us, making me feel simultaneously excited and stalker-ish. If there is a quiz for “Do you blog too much?” I think “Have you ever recognized a blogger in a hotel lobby?” would be one of the questions. There were 7 of us all together: 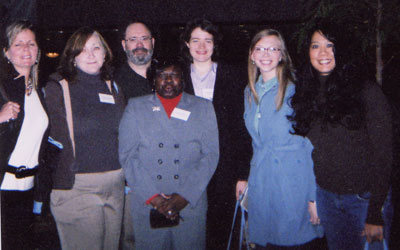 From left to right: Dotsie from Boomer Women Speak and the National Association of Boomer Women (who has lovely eyes even though you can only see her lovely eyelids in this photo. Sorry, Dotsie!), Elizabeth from GenBetween and Busy Mom and Career and Kids, Jerry from Your Life After 50, Beverly from lots of stuff including her personal site, Boomerworld and Baby Boomer Talk & Other Stuff, me (obviously), Sylivia who posts on Diet-Blog and at Sylvia’s Insight and Stephanie from Back in Skinny Jeans. Whew! I’m glad there were only seven of us because it took forever to type all those links. Hallmark invited more people, but the mommy bloggers had childcare issues, surprisingly enough. I’m not sure why the cancer and depression bloggers couldn’t come, but perhaps they had health issues?

Tomorrow, I’ll tell you how the day went. Not only that, I will be giving away free stuff!