“You’re going to have to kill me, bitch!” the man in a white t-shirt and jeans yelled as he dashed across the Quiznos parking lot. Was he talking to me? I had just opened the car door and my mother had just popped the trunk so I could stow away my backpack. Then we were going to have a light dinner before the Indy Irish Fest 5K run at eight o’clock. As a cop pursued the man across the street and another one dashed out of the Marco’s Pizza next door, I decided that, no, he wasn’t talking to me. Then I shut the door, locked it and begged my mother to roll up the windows.

“Maybe we should go somewhere else for dinner,” I suggested. A police car pulled into the parking lot with its sirens wailing.

“Are you kidding?” She replied. “This is the safest place in town. We’re surrounded by police.”

I just wanted to get to the Indy Irish Fest 5K, but I’d gotten stuck in the middle of the Escape the Fuzz 5K being run by one individual without a numbered bib or a timing chip. The competitor didn’t make it the entire five kilometers. He was apprehended and handcuffed across the street. Looks like they didn’t have to kill him to do it either.

It was still two hours until my race, but I was very hyped now. It could have been pre-race anticipation, but it was probably my imagination thinking of scenarios where I’d gone to the trunk 10 seconds sooner and been pulled into a hostage situation or a carjacking or been tragically shot in the Quiznos parking lot. (I don’t think the runner had a gun, but my imagination didn’t care.) Then my family would have to figure out how to log into my blogging software and tell you people that ironically my increased fitness and my participation in a 5K race led to events that killed me. Puts the whole butter vs. margarine debate into perspective, doesn’t it?

I got over my anxiety as I ate a Flatbread Sammie at Quiznos, which is basically a small sandwich with a fancy name that costs $2.00 (+ tax). I love that restaurants are starting to offer smaller portion sizes. We met up with my younger brother and headed for the Irish Fest to pick up my bib number – 51. I have an unnatural compulsion to analyze numbers, so I noted that it was one less than the number of weeks in a year. I thought it was a prime number too, but I just checked and it is divisible by 3 and 17. Damn those multiples of 17! They are so hard to catch. 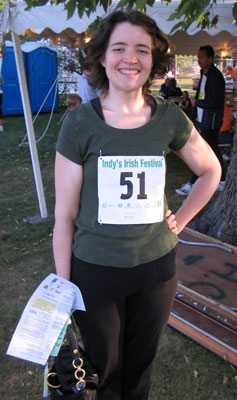 There was still an hour until the race started at eight o’clock that evening, so we explored the festival. They had four stages set up with Irish rock, traditional Irish music, dancing and lots of vendors selling Irish paraphernalia. These leaf people decorations seriously creeped me out. If I’d been drinking the Irish beer I probably would have hallucinated that they were whispering running tips to me. “Remember to pace yourself! And don’t forget to stretch!” 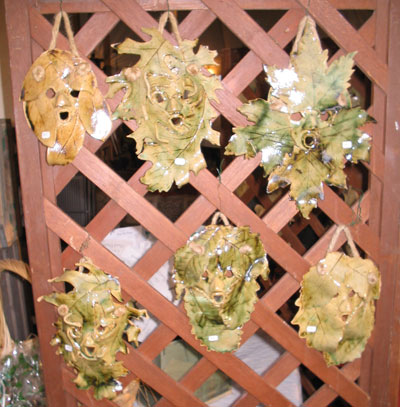 There was also a vendor who was selling Irish food, including the delightfully named Pinhead Oatmeal. Do you have to be a pinhead to eat it? Or does eating it turn you into a pinhead? 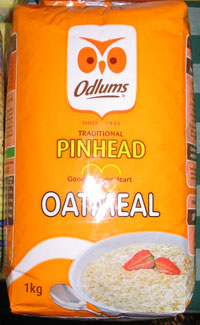 As the race time approached, I used the Port-o-Potty and congregated with the other racers near the start line to stretch. It started to get cold and I did not envy the woman wearing only a sports bar and running shorts.

Then the bagpipers arrived. 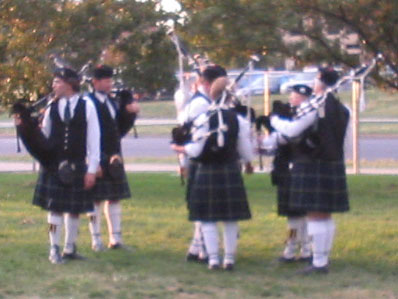 They marched down the right lane of the street that had been sectioned off for us with fluorescent pylons. I positioned myself towards the end of the pack. The sun was beginning to set, so I cracked the green glow stick I’d gotten at registration. While this made it less likely that I’d get run over, it also made our group of runners look like a hoard of ravers trying to escape a police raid. A man in a van with a loudspeaker started counting down the minutes to the race. Five more minutes. Two minutes. The race will start in one minute! And then we were off!

I recalled everyone’s advice not to go too fast at first. People who did not heed that advice started passing me even though I was at the back. We ran down New York Street, right through a red light, as cars were forced to stop and honk angrily at us. Ha! I stuck to a pace where I was breathing in for 3 steps and breathing out for 2. At the one mile marker someone called out the time on a stopwatch. 11:30. That was a bit slow for me, so I started to pick it up. I’d already started passing people who’d started off too fast and I continued to pass people until the last half mile of the race. Passing people is fun. Passing men is really fun. Passing thin men is totally awesome! Eat my BMI, skinny boys! (I apologize to any skinny boys reading this, but it was truly fun kicking your ass.) At the two mile marker I discovered that drinking from a cup of water while running is a skill I need to practice. My time was 20:35, so I’d obviously made up any speed I’d lost earlier on.

Then there was the hill.

Nobody told me about the hill. Indiana doesn’t have many hills. When I saw that my training program called for a day of hill running once every week or two I just scoffed because the most I can find around here is a gentle slope. Honestly, this wasn’t even a hill, just a slight incline, but it did slow me down. Then I got to run downhill over the canal bridge towards a view of the Indianapolis skyline lit up like a Lite Brite. “Oh,” I thought, “Maybe this is why they run this at night.”

As I got closer to the finish line I started pushing it harder, breathing in for two paces and out for one. I knew the finish line wasn’t far ahead. And I kept running. And running. And where was the finish line again? Wait a minute, did that faint chalk writing on the street say I had another half mile. A half mile?! I slowed down a little bit and three or four people passed me in the last half mile.

Finally I turned the corner and there was the finish line, which looked like a gate made from a giant erecter set. It was all lit up with people on either side cheering. A girl was running about 15 yards in front of me and I thought, “I can totally beat her if I just sprint.” So I kicked it up and ran through the line, crossing through eight inches before her.

There is no photo of my crossing because I have a crappy camera that takes 15 seconds to warm up the flash. Also, its batteries died after I took photos of wolfhounds and leaf people earlier in the day. Here’s me near the finish line after I changed the batteries. I am staring at the camera thinking, “I am going to wake up at 4:00 a.m. the day after Thanksgiving to buy myself a camera not made out of feces.” 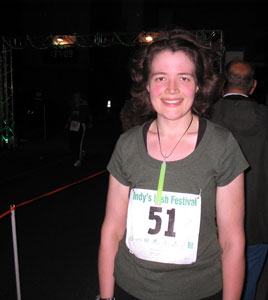 I finished in 32:35, placing 345 out of 448. In the female age group of 25 to 29, I placed 35 out of 50. Yeah! There were 103 people slower than me and 15 of them were my age and gender! I ate a banana and an apple afterwards and I also went back to the Pinhead Oatmeal tent to buy foreign candy. I ate a Walnut Whip and a Cadbury Turkish Delight. The nutritional information was printed slightly differently than in the US. 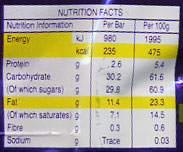 980 calories! What is in this thing? No, wait, that’s 980 kJ or kilojoules. Kilojoules? What am I, a light bulb? I was also confused because it listed the information not just by how much is in the bar, but how much is in 100 grams.

Overall, this was a great 5K experience. I ran the whole thing and I also got to see some sheep dogs and listen to a funny toast competition. The festival was much more fun at night when everything was lit up by generators against the night, making it more like a carnival and not just a bunch of people milling around some tents.

The best thing about the race was that it ran right by The Lawn at the White River State Park and past the parking lot at the Zoo. Over three years ago, I went to a Ben Folds/Guster/Rufus Wainwright concert there and was exhausted walking back to my car. As I jogged past the lawn entrance and across the bridge over the canal, I waved at my old self, as if I could overlay this moment in time with that one. She didn’t see me, of course, even though I was breathing heavily just like she was. But this time I wasn’t struggling to get back to my car. I had miles more to go and I was feeling alive. So I stepped up my pace and passed her by.